If you’re planning on purchasing the best Canadian maple syrup on the market and need some advice, look no further! We’ve done the research, reviewed the brands, and even put together a comprehensive buyer’s guide to help you find the best offer on the market.

ReviewMoose appreciates your support. We might earn a commission at no extra cost to you if you buy through the links on our site. Read our full Affiliate Disclosure. 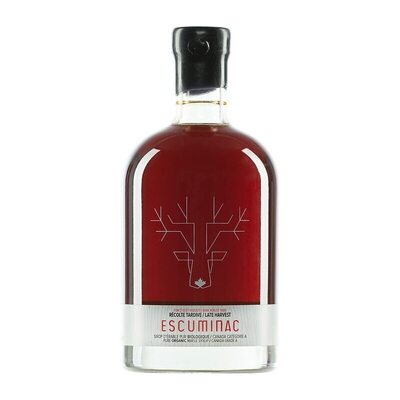 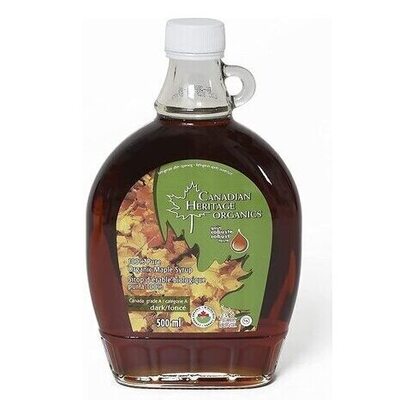 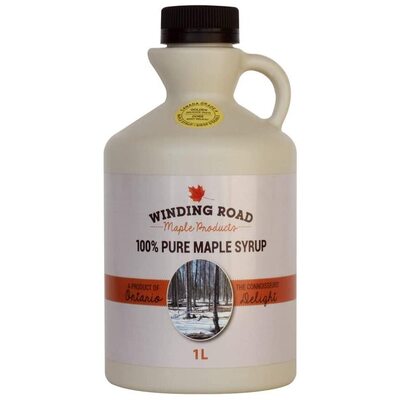 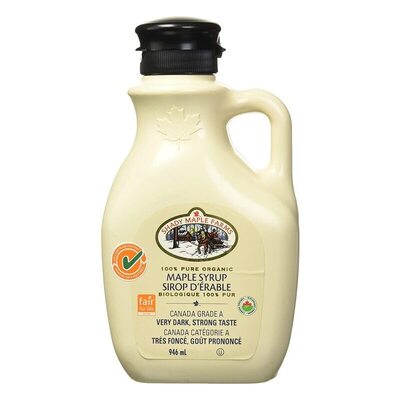 If you’re looking for high-quality maple syrup, you’ve come to the right place. We’ve included detailed information on some of Canada’s best, as well as tips on how to choose the best brand.

We’ve placed the award-winning Escuminac Great Harvest Maple Syrup at the top of our list. This brand just might be the best maple syrup in Canada, as it’s readily available and has an extra fine and rich taste.

Martin Malenfant (the manufacturer) harvests and bottles the syrup at his maple farm in Escuminac, Quebec. Its unique taste comes from the fact that it’s never mixed with syrup from other areas.

This product is verified USDA Organic, 100% traceable from forest to the plate, gluten-free, vegan, and free of additives, preservatives, and artificial flavours. That’s why it got our number one maple syrup rating.

Unsurprisingly, the Great Taste Award UK 2019 gave it a two-star rating out of three. When testing this product, we couldn’t help but notice that it’s a delightful natural sweetener. It’s indescribably delicious with pancakes, waffles, oats, yogurt, fruit salad, desserts, and drinks.

Escuminac Great Harvest has a tantalizing buttery texture and richness. We highly recommend it because it’s an organic grade A maple syrup with a dark, robust flavour from one of the best gluten-free maple syrup brands. Plus, it’s packaged in a stylish glass bottle, making it a fantastic gift idea for friends and family.

We’ve included Canadian Heritage Organics in our list for their dedication to creating healthy, organic products, as the name suggests. We really liked this syrup because it comes from the Appalachian region, known for producing some of the best maple syrup in the world due to the mineral concentration of the soil.

They also guarantee the best manufacturing methods overseen by three generations of experienced artisans. So, if you’re searching for distinctive light maple syrup, this is the brand for you.

This company is one of the top producers of maple syrup with the strongest flavour and a rich dark colour. Furthermore, Ecocert Canada has certified all Canadian Heritage Organics products as organic. Plus, our Jewish readers will be pleased to know that they’re also certified Kosher by Montreal Kosher.

Another key selling point is that Canadian Heritage truly respects organic farming techniques. Their maple syrup contains no artificial additives, colouring, preservatives, or chemicals applied at any stage of the process.

Made on a family-operated farm in Elmira, Ontario, this award-winning and locally harvested maple syrup is vegan-friendly and gluten-free.

Following the industry-leading manufacturing standards, the Winding Road Maple Syrup is free of preservatives, artificial flavours, and additives. In other words, it’s a great choice even for those with special dietary needs.

The syrup has also won the Quality and Taste Competition in  Elmira — the home of the world’s largest maple syrup festival — two years in a row (2014 and 2015).

Another feature worth considering is the product’s affordability. To our delight, a 1-litre of this 100% pure maple syrup costs $29.99. Moreover, given its thickness, it’s likely it will last you for quite some time.

We tested this syrup by adding it to meals (pancakes), desserts (ice cream), and beverages (tea and coffee). Both the taste and consistency deliver, that is for sure.

What’s more, we put it in a fridge to double-check if it was pure (a watered syrup will freeze almost immediately). As expected, the syrup didn’t freeze solid. Instead, it just got thicker.

Cited as Canada’s best maple syrup by satisfied customers, Shady Farms Organic Maple Syrup from Quebec has made it to our list for many reasons.

While dark syrups tend to be recommended for baking, we found the Shady Farms Organic Maple Syrup quite fitting for desserts, yogurts, and pancakes. Without exaggeration, drizzling this good-quality maple syrup on our in-house favourite vanilla ice cream was a one-of-a-kind treat for our taste buds.

You can rest assured that the product manufacturing adheres to strict processing and cultivation regulations. Furthermore, continuous monitoring and stringent criteria guarantee the unwavering purity of the Canadians’ favourite.

Given the quality and nutritional value, this maple syrup is an excellent addition to healthy eating. So pamper your taste buds and leverage all the benefits a maple syrup brings to the table.

When compiling this list of the top maple syrups on the market, we considered various factors. For example, it’s best if you’re aware of the origin, grade, packaging, pros, and cons when picking the best Canadian maple syrup for you.

Collecting maple sap for maple syrup production began long before Europeans arrived in America. Several Native American stories back up this claim. However, there are no documented accounts of when it was first discovered.

According to the Michigan Maple Syrup Association, the Chippewa and Ottawa tribes of Michigan have a legend about a god named NenawBozhoo. He suspected that his people were getting lazy because they drank the pure maple syrup from the maple trees instead of hunting or foraging food. So, he supposedly put a spell on the maple trees, turning the syrup into a watery sap that had to be processed before being ingested.

While this may only be a story, we know how early Native Americans prepared maple sap. They collected it in large, shallow bowls made from bark and then froze them. This process would separate the water from the sugar.

New and better ways to prepare maple sugar emerged over time. Native Americans began to construct “sugar bushes” and boil the sap using hot stones. When European settlers arrived, they began collecting and then boiling the sap over an open fire. Both of these new processes marked the beginning of quality maple syrup produced in North America.

Today, maple syrup harvesters utilize tubing to carry sap from the tree to a “sugar shack,” where it’s then boiled into syrup. Though production processes have changed over time, maple syrup’s rich and sweet flavour has remained consistent. Nowadays, Canada dominates the world’s maple syrup production, accounting for 85% of global output.

Maple syrup was once rated using three letters: A (light), B (dark), and C (very dark). This method led many individuals to believe that grade A was the best maple syrup grade and of superior quality than grades B and C. However, the quality of all of the syrups was the same.

The maple syrup quality grades’ sole distinction is their colour and flavour. Syrup from sap gathered early in the season has a brighter colour, and syrup collected later in the season, when the weather is warmer, has a darker one. The richer the flavour of the syrup, the darker it is.

Vermont (the US state with the most significant maple syrup production) established new, less ambiguous maple syrup grading criteria in 2014. In short, all syrups would be designated by the letter “A” but with more detailed names. So, if you’re interested in how to find the best grade maple syrup, check out the new grade list below.

There are a variety of ways to package your maple syrup. The most popular and best maple syrup containers are:

Many companies add catchy labels and ornamental elements to their containers to make the finished product more enticing.

The primary antioxidants contained in maple syrup are:

and different flavonoids such as:

While most occur in low concentrations, others are found in higher amounts. Thus the antioxidants may offset some of the adverse effects of ingesting the syrup’s high sugar content.

Maple syrup world reviews show that it contains anti-inflammatory polyphenol antioxidants. Therefore, it can be ingested in moderation as part of a healthy diet to help avoid diseases including:

The plant-based compounds found in the syrup help to minimize oxidative stress, which causes us to age more rapidly and weakens our immune system.

While some data suggests that sugar can cause or contribute to cancer, maple syrup appears to be a considerably less dangerous sweetener. Mainly because maple syrup of the best quality contains antioxidants that help protect cells from DNA damage and mutation.

Maple syrup alone is unlikely to lessen your risk of cancer. However, it’s a safer alternative than consuming large amounts of refined sugar or artificial sweeteners.

Abundance of Vitamins and Minerals

In addition to potassium and calcium, good maple syrup brands include significant levels of zinc and manganese. Zinc can help you fight sickness and boost your immunity by keeping your white blood cell count high, whereas manganese is vital for:

Because bacteria can feed on sugar in the mouth and grow, all sugar can encourage tooth decay, especially when highly concentrated. Therefore, a person’s risk of developing dental cavities increases when they consume more sugar.

Is maple syrup good for diabetics?  No, as carbohydrates in the form of sugars are found in maple syrup. Because these sugars lack fibre, consuming maple syrup can cause blood glucose and insulin levels to fluctuate. Therefore, ingesting maple syrup may cause problems for people with diabetes in particular.

We hope that our reviews and buyer’s guide have given you the necessary information to choose the best Canadian maple syrup for your individual taste. Though there are multitudes of reputable brands on the market, we feel that our suggestions will get you on the right track in regards to enjoying this beloved condiment that is now available in 45 countries around the world.

Remember that If you’ve purchased 100% pure syrup, it can last for up to a year (unopened) in the pantry. Once opened, it can also last for a year in the refrigerator and indefinitely in the freezer.

What is the best Canadian maple syrup?

According to our findings, the best one is Escuminac Medium No.1 Great Harvest Maple Syrup. It is graded A Amber Colour and Rich Flavour, and it’s readily available. Not to mention that it is organic, pure and unblended. You should give it a try or purchase it as the perfect gift for your friends or family.

What is the best grade of maple syrup?

There isn’t one best grade of maple syrup. However, each one offers a different taste, and it all comes down to your personal preference. So, when people want to know which grade of maple syrup is the healthiest, there is no definitive answer. To help you discover what might best suit your needs, here are some rating explanations:

Which is better: amber or dark maple syrup?

According to our tasters, both the dark and amber variants have a clean maple flavour. But the latter is less intense and more complex than the former. When you compare the amber and dark syrups, you can certainly taste the difference, but whether the amber or dark syrup is better is a matter of personal preference.

What is the healthiest maple syrup to buy?

We’re not sure that there is an absolute answer to this question. However, Canadian Heritage Organics Maple Syrup is our pick as the healthiest option from our review. Mainly because they genuinely respect organic farming techniques, so their maple syrup contains no artificial additives, colouring, preservatives, or chemicals applied at any stage of the process

Which syrup is Canada famous for?

16 Mattress Industry Statistics for Canadians in 2022

After teaching for 8 years, Damjana found a new challenge — writing. With her academic background in the English language, doing research and writing is always fun and enjoyable. In her spare time, she loves binge-watching TV shows, especially crime documentaries, or spending time with her dogs.

Top 5 Loans in Canada With No Credit Check

Where To Buy the Best Online Glasses in Canada?