Oculus Quest might just be the most impressive piece of VR tech ever made. A surprisingly powerful and fully standalone VR headset, it has opened the doors to virtual reality for millions of people. While its main allure is that it can be played anywhere, anytime, many people turned it into a dedicated PC VR headset.

If you were wondering how to connect Oculus Quest to a PC so you can get access to an ever-increasing library of VR experiences, then this article’s for you. We will explain what you need for wired and wireless connections and provide tips for the best gaming experience.

Since Oculus Quest is a standalone device, there aren’t any system requirements to use it other than owning the device itself. But, to use it on a PC, it will need to meet certain criteria.

First of all, your PC needs to be fully VR compatible. That means a setup with at least one USB 3.0 port and a Windows 10 OS. Additionally, your machine must be powerful enough to run all that VR content without a hitch. Oculus Quest on PC works just like any other VR headset, meaning that your PC will be doing all the work rendering games and processing tracking data.

Current system requirements for the headset look like this:

Obviously, you’ll want to exceed these requirements. As with any PC video game, it’s better to run it on a more powerful system and be certain there won’t be any slowdowns or FPS drops in graphically intense scenes. This is especially important for VR as any slowdowns can cause motion sickness.

The current list of supported GPUs is available on the Oculus compatibility web page, along with detailed Oculus Quest PC requirements. It’s worth visiting that page as certain graphics cards, especially those on laptops, aren’t officially supported and might lead to problems when trying to play VR games.

How to Connect Oculus Quest to PC via USB

Once you’ve verified that your PC is VR-ready, it’s time to hook everything up. There are two things you’ll need – a cable and some software.

The USB cable must be long enough to provide space for unrestricted movement while you’re tethered to your computer. Oculus recommends at least 3 meters, and the cable needs to have a USB-C connection on one end as that’s the port available on the device.

The manufacturer offers its own Oculus Link cable, but it’s an expensive option at around $100. You can find more affordable and equally sturdy cables if you shop around.

The next step for connecting Oculus Quest to a PC is downloading and installing the official Oculus App on your computer. You’ll also want to install Steam, a popular digital storefront with hundreds of VR games and apps.

Now you’re ready to set up your Quest to work with a PC. Follow these steps to pair the device with your PC: 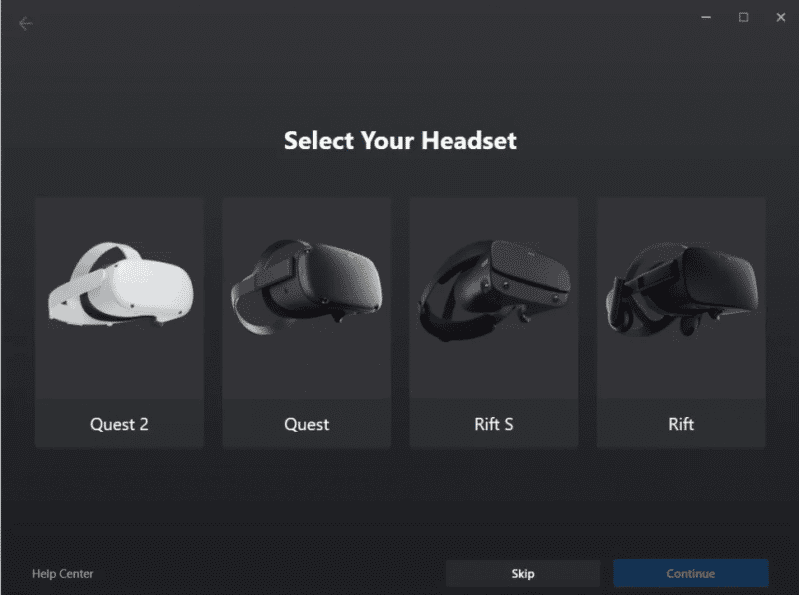 And that’s it! From this point on, whenever the headset is connected via the Oculus Quest link cable, your computer will immediately recognize it and offer you to enable the VR link. You can now launch your games through the Oculus App or open up Steam to access many more SteamVR experiences.

Steam will ask you to go through the setup process when you turn on the SteamVR for the first time, but it’s very straightforward, and you’ll just need to follow the on-screen prompts.

How to Connect Oculus Quest to PC Wirelessly

Since the Oculus Quest is a fully wireless device, it’s natural that you want to keep that untethered experience even when playing on a PC. Luckily, the Oculus app offers a wireless mode, too. It’s just a matter of choosing the Air Link option during the setup.

But, a wireless connection for Oculus Quest requires additional hardware. You’ll need a Wi-Fi router capable of producing a strong 5 GHz signal. The device also needs to be relatively close to the play space, ideally unobstructed, as the 5 GHz signal has a shorter range than the 2.4 GHz one. Your PC needs to be connected through Ethernet, as a wireless PC connection isn’t recommended and can cause laggy experience.

To connect Oculus Quest 2 to a PC via Wi-Fi, follow the same setup process we explained in the previous section for adding the new headset. At one point, you’ll be presented with a selection between a wired and wireless connection: 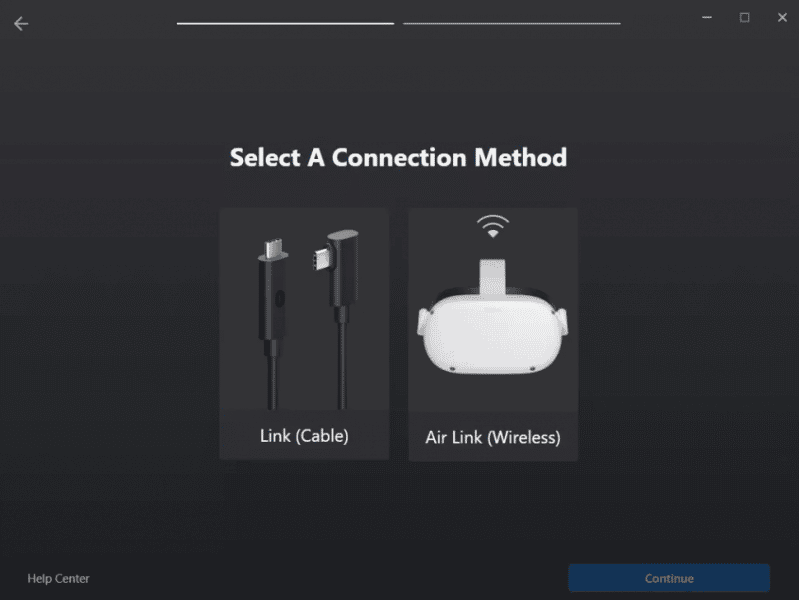 Choose Air Link (Wireless), and the headset will pair with your computer. In some cases, you may need to enable this connection on the headset itself, especially if you have the original Quest, as this feature was added later and isn’t enabled by default.

With your Oculus Quest turned on, visit the Settings menu in the headset. Look for the Experimental tab, enable Air Link and pair Oculus Quest to a PC where the Oculus app is currently running.

Once the headset is paired to your PC, you’ll find a quick action in the Quest’s menu to turn the Air Link on and off. You’ll also have to select your PC from the list each time.

There is an alternative method for using the Oculus Quest with Steam through a wireless connection. This method requires a Virtual Desktop app, which allows you to use all of your PC’s features on your Quest, including standard Windows features. The system requirements are the same: a PC powerful enough to run VR content and a 5 GHz router.

On top of that, you’ll need two apps – Virtual Desktop Streamer for PC and Virtual Desktop for the Quest. The latter isn’t free. It’s a $20 app that you can buy through the Oculus store.

With both apps running, it’s just a matter of syncing the Quest to the computer, which should be an automatic process.

It doesn’t matter if you’ve got the original Quest or its younger, more popular successor Oculus Quest 2 – both are fantastic headsets that provide phenomenal VR experiences. Once you link Oculus Quest to a PC, you’ll probably be hesitant to go back to the standalone experience, as the PC VR offers some amazing high-fidelity games you won’t find anywhere else.

Yes, it is rather demanding hardware-wise, especially if you’re after the most popular games, but once you’ve experienced VR this way, there’s no going back.

Can you hook up an Oculus Quest to a PC?

Yes, you can use Oculus Quest as a tethered headset, just like with the Oculus Rift S headset. You can also go completely wireless. The headset can be connected via USB cable or linked wirelessly, thanks to the official Oculus App.

Can I connect Oculus Quest to PC without cable?

Yes, you don’t need any cables to use your Oculus Quest on a computer. Once you download the official Oculus App, you’ll be able to sync the headset through your local Wi-Fi network.

Do you need a gaming PC for Oculus Quest?

For gaming on the PC via link cable, you’ll need a VR-ready computer to get the proper VR experience. Oculus Quest is mainly a standalone device, so you can still play hundreds of games on it if you don’t own a gaming PC.

Can you hook up an Oculus Quest to a laptop?

Yes, Oculus Quest works on Windows laptops, too. When we explained how to connect Oculus Quest to PC, we mentioned that certain GPUs aren’t officially supported. That includes some laptop models, so it’s best to check the official requirements to see whether your laptop is VR-ready.

Tools, Tricks, and Tips on How to Record a Podcast

What Is a Stylus Pen, and What Is It For?

What Is Live Streaming? A Comprehensive Definition

What Is a Stylus Pen, and What Is It For?

What Is Live Streaming? A Comprehensive Definition