How To Connect an Xbox One Controller to a PC

There’s always a healthy debate between PC and console gamers about which option is better. Of course, choosing the right system is not just about game availability and hardware; it’s also about the input device. But what if you could have the best of both worlds? Now, we can’t port console-exclusive games to a PC, but we can tell you how to connect an Xbox One controller to a PC and use it for clever purposes like installing Linux on a virtual machine. Why? Because we can!

Connecting Xbox One Controller to PC

There are three ways to connect any Xbox One controller to your PC: USB, Bluetooth, and wireless. With a suitable cable, USB is a simple plug-and-play option. Bluetooth is a bit more complex and may require a Bluetooth adapter, while wireless requires an Xbox wireless adapter. We’ll cover them all in detail throughout this article.

Connecting the Xbox controller to the PC is as simple as it sounds. You need a data sync micro-USB cable for an Xbox One controller and a USB-C cable for Series S and X controllers.

Be aware that the batteries will continue to drain even when the Xbox controller is plugged into the PC. The only way around this is to get a charge kit for your controller. Xbox One, Series S, and Series X use a different kit that allows you to play without any battery concerns.

How To Connect Xbox One Controller to the PC using Bluetooth

Which Xbox Controllers Have Bluetooth?

Xbox One controllers come in two variants: those that support Bluetooth (made after 2016) and those that don’t. You can distinguish them by the plastic casing around the Xbox button. Older models have smooth, glossy plastics around the Xbox button, which is a part of the upper casing. Unfortunately, older models don’t come with Bluetooth installed.

Older models can be connected via a cable or with the Xbox wireless adapter. We’ll cover that option later on in this article. 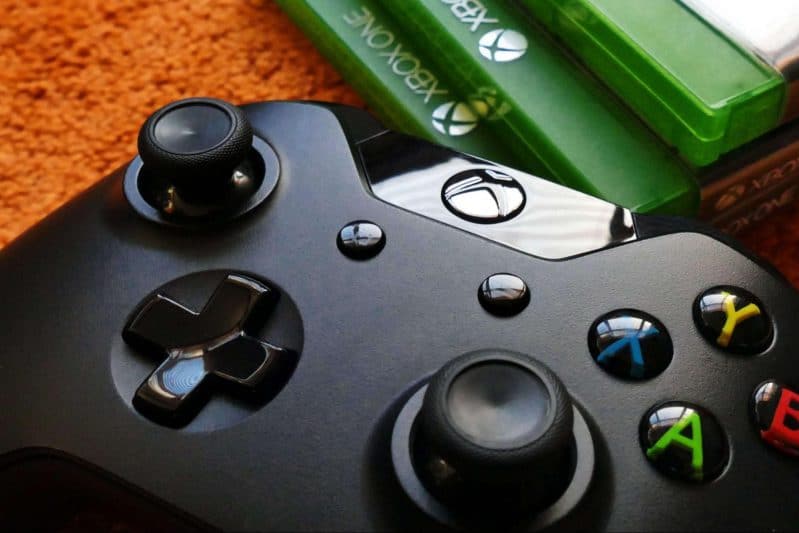 Example of an Xbox controller that doesn’t support Bluetooth.

All the newer Xbox Series X and S controllers support Bluetooth. If you’re unsure which controller you have, check whether you have a 3.5 mm headphone jack on the bottom; all the newer models have it.

Connecting an Xbox One Controller to your PC

First, we need to enable Bluetooth on the PC itself. On Windows 10, go to Settings > Devices > Bluetooth & other devices. Ensure Bluetooth is turned on and leave the window open.

If you’re running Windows 7, go to Start > Devices and printers > right-click on your computer in the list and select Bluetooth settings. Select the checkbox to allow Bluetooth devices, then click Okay.

Now turn on the controller and press and hold the sync button until the Xbox logo begins to flash rapidly. Flashing indicates that the controller has found a machine it can connect to. To finish the process, go back to the PC’s Bluetooth screen and in the Pairing menu, select the Xbox controller and follow the steps to complete the pairing process.

The only limitation is that you can’t use the headset jack on the gamepad, but that doesn’t stop you from using the PC’s audio jacks.

If by any chance you don’t have Bluetooth on your PC but you don’t want to use a USB cable, consider getting a Bluetooth adapter. It’s cheaper than getting an Xbox wireless adapter and it achieves the same thing.

There are some benefits to using an Xbox wireless adapter. For example, it enables up to eight gamepads to be connected, while Microsoft’s recommendation is to use just one gamepad with Bluetooth.

How To Connect an Xbox Controller to a Laptop

All the methods mentioned in this article will also work for laptops. In fact, the process might be easier given that most laptops come with Bluetooth. You only need to make sure that the latest drivers are installed.

Most Common Xbox One Controller Issues

If there are any issues connecting your Xbox One controller via Bluetooth, run a Windows update, check the optional update tabs, and look for anything Bluetooth-related. Update Windows and try again.

Make sure you’re using the correct micro-USB cable. Certain micro-USB cables are only used to provide power transfers, but Xbox One controllers require cables that use data sync, which provides both power and data.

People often mistakenly try to use the cable that comes with a regular Xbox One controller. That cable is for power transfer only; it can’t transfer data. If you need to shop for a new cable, just look for a USB type-B cable with data-sync.

Updating and Configuring the Xbox One Controller

Xbox One controller drivers are installed when you connect the controller to the PC. You can install the Xbox Accessories program from the Windows store, which allows you to update the firmware on your controller and preconfigure your controller on a game-by-game basis instead of doing it in-game.

Updating firmware is a simple and entirely optional step. The Xbox controller must be connected to the PC using a micro-USB cable, then all you need to do is press Update firmware.

Xbox Accessories can only be installed on machines running Windows 10.

Reconnecting the Xbox Controller Back to the Xbox

When you’re finished gaming on your PC, you may want to reconnect your Xbox controller back to the Xbox.

You won’t be able to turn on the vibration on your Xbox controller while paired with the PC, but you can do everything else, including playing games via Xbox Cloud. As long as the game is labelled “play anywhere,” you can continue playing the same saved game on your PC. All that’s left to do is sit back and play some games. Is there anything that your PC can’t do these days?

Can I use an Xbox One controller on a PC?

How do I connect my Xbox One controller to my PC wirelessly?

There are two ways of connecting the Xbox One controller to the PC without using a cable; the first is by using Bluetooth, and the second is by using an Xbox wireless adapter.

How do I connect my Xbox controller to the PC?

You can connect your Xbox controller using a USB cable or Bluetooth. If you have an older version of the Xbox One controller that doesn’t support Bluetooth, you’ll have to use the USB cable or obtain an Xbox wireless adapter for your PC.

Are Xbox One Controllers Bluetooth?

PlayStation vs. Xbox - A Battle for the Ages

Nintendo Switch Review: The Perfect Console for Gaming on the Go

After teaching for 8 years, Damjana found a new challenge — writing. With her academic background in the English language, doing research and writing is always fun and enjoyable. In her spare time, she loves binge-watching TV shows, especially crime documentaries, or spending time with her dogs.

Buying US Stocks in Canada: All You Need To Know

How To Buy From AliExpress in Canada: A Step-By-Step Guide

Best Stock Apps in Canada in 2022 (Tested and Reviewed)

Qtrade Review: Everything You Need to Know

Coinsquare Review: All You Need to Know