A Guide To Rocket League Controller Settings: Start Playing Like a Pro

Rocket League has been around for a while. Launched in 2015 as a sequel to Supersonic Acrobatic Rocket-Powered Battle-Cars, the game proved to be a massive hit. It’s even a very popular esports title, with Rocket League Championship Series gathering the best players around the world.

Naturally, players want to set up their Rocket League controller settings for optimal performance. That’s why, in this article, we’ll guide you through all the settings in the game and explain how different settings affect the gameplay.

The best way to get better at Rocket League is to, well, play it a lot. Practice makes perfect, especially in such a fast-paced game where mastering the mechanics is everything. But, you can make certain adjustments and change in-game settings to make that path to Champion and RLCS a bit more manageable.

First, if you’re playing on a controller, it’s best to use a wired one or connect your wireless controller via USB to reduce possible input lag. Then, you’ll need to adjust Rocket League’s settings for the optimal experience, so start by booting the game on either PC or console.

Once you’re in the game’s settings menu, you’ll want to edit a few things in the Gameplay tab. Specifically, these settings:

Other settings like text chat and split-screen layout are entirely optional and don’t really impact the gameplay. 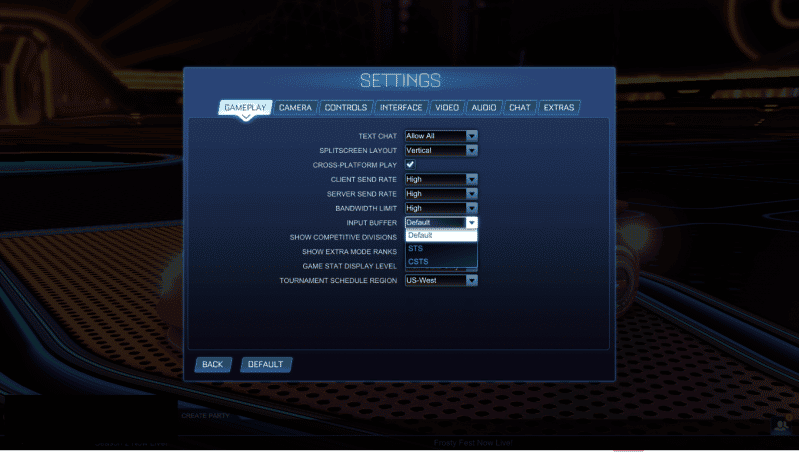 Next up, head to the Video tab. Here, set the Resolution to the native resolution of your monitor/TV. Keep the game in Fullscreen mode and disable Vsync to reduce possible input delay. Frames per second should either be uncapped or limited to the screen’s native refresh rate. 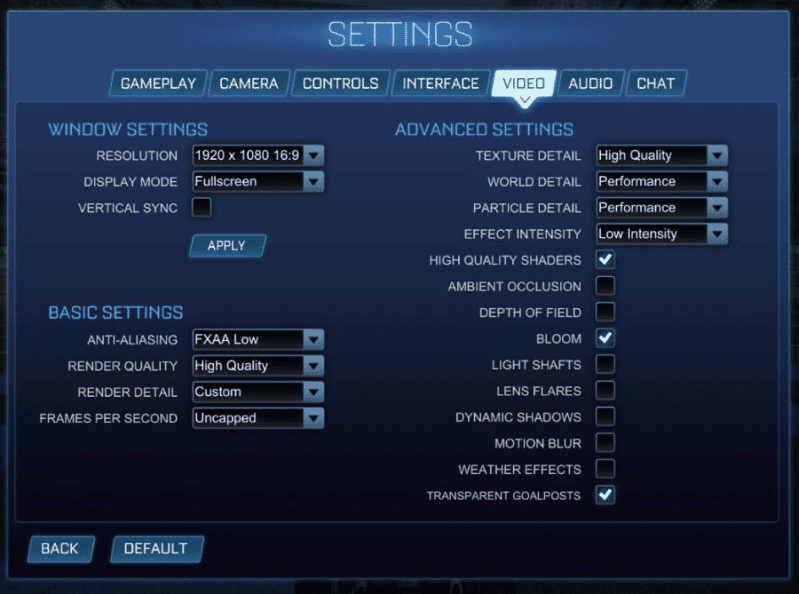 As for the advanced graphics settings, we recommend disabling motion blur and lens flares. Everything else is up to you and your rig – if your PC can handle very high details and maintain a stable framerate, then you have no reason to reduce the graphic fidelity of the game.

With the game set up for optimal performance and our favorite controller ready to go, it’s time to fine-tune the control settings in Rocket League. You don’t want to play on default control settings because they tend to hinder the skill ceiling you can achieve. You want quick reactions and better control, which our recommended settings will help you with.

Switch to the Controls tab in the Settings menu. This is where we’ll be editing all the settings related to how the game controls. Obviously, not all controller settings for Rocket League work the same for all players, so you may need to adjust them according to your playstyle and personal preferences.

Don’t worry about changing these settings; everything can be reverted to defaults, and you can try again. Also, it’s highly recommended to test out the car’s handling in the Training mode whenever you make any changes to confirm that the game still feels good to play. 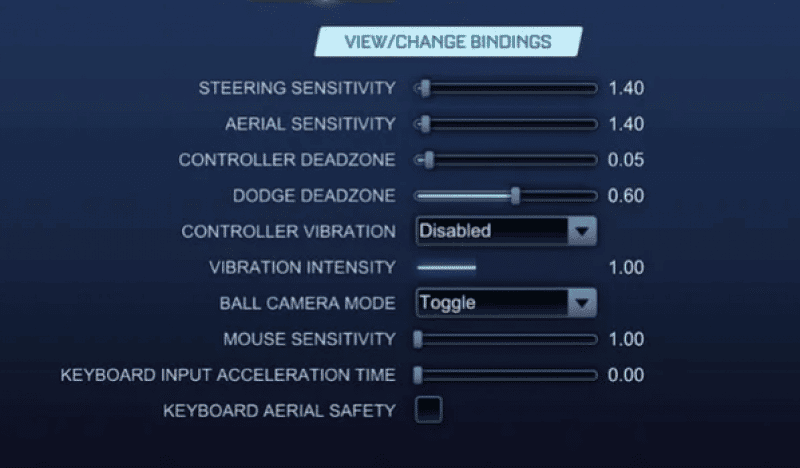 This setting affects the car’s turning rate. Since we don’t want the game to go spastic, we’re keeping it at low value.

Like ground sensitivity, the aerials can quickly go out of control. But, if you play a lot of them and want those flashy moves, set this at 1.5 or higher.

The deadzone affects the game’s response time on thumbstick inputs. Lower is better, but we don’t recommend putting the Rocket League deadzone settings below 0.05, as it can lead to unwanted movements while you’re just resting your thumbs. It’s exactly like the settings in games like Warzone, where deadzones should never go to the lowest value.

Flips are one of the core mechanics in Rocket League. You want to perform them to execute different maneuvers quickly, but don’t put this setting too low as the game might mistake your double-jump input for a flip.

To avoid any distractions, keep this setting disabled. The rumble feature on a controller is fun initially, but it may lead to joint pain, especially if you’re gaming for several hours per day.

To round up the best Rocket League controller settings, set the ball cam to Toggle. The other option is to hold down the button for it, which is very uncomfortable and distracting.

Changing the settings mentioned above is just one part of the control optimizations for this game. Rocket League has a pretty decent default control scheme, but it can be improved further by switching a few keybinds here and there.

The way Rocket League is set up is that you’re using the controller’s face buttons (ABXY on Xbox, for example) for jumping, drifting, boosting, and activating aerials. All while the shoulder buttons remain mostly unused, except for the “show scoreboard” button.

As your Rocket League skills grow, you’ll be using more aerials and other advanced moves requiring multiple button presses. So, the default control scheme isn’t the optimal way to play.

Let’s look at the Rocket League pro controller settings first. These are the keybinds for Xbox, PlayStation, and Nintendo Switch Pro Controllers:

As with other settings, test every change you make in the training mode, especially if you’ve played Rocket League for hundreds of hours and need to acclimate yourself to these new keybinds.

Rocket League, like any other esports game, is all about honing your skills and optimizing every little thing to perfection.

Whether you use default or pro Rocket League controls, stick to the settings we explained in this article, or make your own setup, the road to high ranks is all about putting in the time to get comfortable with the controls and mastering the game’s mechanics.

How do you set up controls in Rocket League?

All settings, including the controls and controller options, are available from the game’s Options menu. Just switch to the appropriate tabs to edit the control settings or change the button layout.

What controllers do RLCS pros use?

Most pros stick to default console controllers – those being the Xbox Series X and DualShock 4 /Dualsense controllers. Some prefer the high-end Xbox Elite and SCUF controllers, but those tend to be costly investments for casual players.

What are the best controls for Rocket League on Xbox?

Ideally, you want to have access to most controls without having to move your fingers off the thumbsticks. That means remapping jump and boost to the shoulder buttons. Ultimately, there’s no “perfect” setup, and everyone prefers different button layouts.

What is the best deadzone for Rocket League?

As we’ve explained in our Rocket League controller settings guide, the ideal deadzone spot is at around 0.1, as it offers quick reaction times without compromising your precision.

What Are Bookshelf Speakers, and Why Do You Need Them?

Studded Tires: Everything You Need To Know