One of VR gaming’s most prominent issues has been the high price tag for VR headsets and demanding performance requirements for running VR games. Oculus Quest was one of the first headsets to provide an affordable standalone solution for virtual reality. The model’s successor does that even better – let’s see how in our Oculus Quest 2 review.

Facebook bought Oculus in 2014. Since changing its name to Meta in October 2021, the company has also rebranded Oculus to Meta Quest. Whether the hardware you’re looking for is named Meta Quest 2 or Oculus Quest 2, it’s still the same thing we’re talking about here.

The Oculus Quest 2 is designed to be instantly recognizable by its smooth white plastic case, head strap, and black foam eyemask. The frontal plate of the headset is flat and bare, with position tracking cameras along the edges, used to see around you without having to remove the Quest 2 from your eyes. 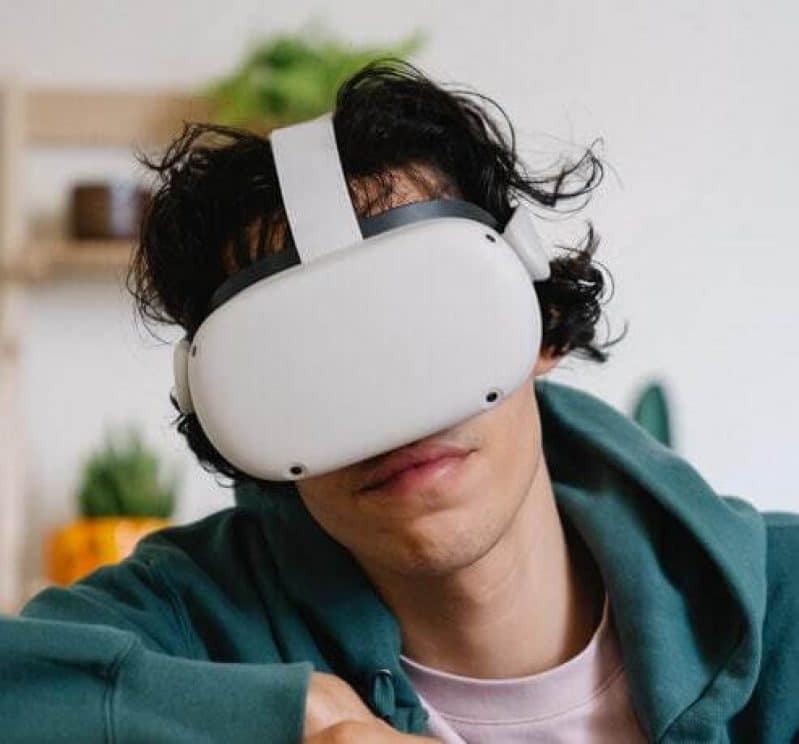 You can plug in your Quest 2 VR headset through a USB-C port to charge it or connect it to a PC. The port is on the left side of the headset, with a classic 3.5 mm headphone jack, while an LED indicator and power button are on the opposite side.

You don’t need headphones to fully enjoy the VR experience with Quest 2, as it has two built-in speakers and a microphone. Volume control is also located on the bottom of the headset.

The Oculus Quest 2 weight is 500 grams, which is an improvement compared to Oculus Quest, making it easier to wear for long hours, but it’s still pretty heavy. The VR headset fits snugly, and has a top velcro strap you can adjust for height and another that adapts to the width of your head with sliding clips.

Since Oculus Quest 2 is front-heavy, if you don’t adjust the straps firmly, the headset can slip when you quickly move your head. The Quest 2 Elite Strap is an upgrade with additional pieces that ensure the headgear fits better.

While conducting our Oculus Quest 2 review, we were particularly impressed with the generous foam padding, making the experience quite comfortable. However, a few users experienced skin irritation from the material; Facebook initially gave away silicone padding to users who experienced this problem. However, now it’s a separate VR Cover Facial Interface & foam replacement set users have to pay extra for. Along with the Meta Quest 2 Fit Pack, this is meant to make the gaming experience more comfortable for everyone. The cover replaces the standard one with memory foam covered with PU leather.

While these accessories make it easy to customize your Oculus Quest 2 to your liking, they also somewhat increase the device’s weight. If you are comfortable with the VR headset as it comes straight out of the box, we recommend using it that way. If it isn’t, its customizations might help you get the best VR Oculus Quest 2 experience.

The controllers that come with Meta’s VR headset are an improvement on those that came with the Oculus Rift and the original Quest. They still maintain the same design – handles topped with rings using front cameras to track their position. Each handle has two main triggers, a circular area with additional buttons, and an analog stick. There is more than enough room at the top of the controllers to rest your thumbs comfortably.

Most Oculus Quest 2 reviews left by users reflect positively on the controller design, as they are less likely to slip from your hand. Also, the battery door isn’t as likely to accidentally open and interrupt your gameplay session. These quality-of-life upgrades don’t make it any more challenging for anyone used to the previous layout of the controllers to get used to new ones.

Oculus Quest 2’s specs are an excellent balance of efficient gaming hardware allowing for stand-alone gameplay and affordable pricing. The headset uses the Qualcomm Snapdragon XR2 SoC CPU, similar to the Snapdragon 865 used in high-end smartphones. The Quest 2 has 6GB of RAM, 2 GB more than its predecessor.

Initially, two versions of Oculus Quest 2, with 256 GB and 64 GB of memory, respectively, were released. In August 2021, Meta also released a version with 128 GB storage, and the Oculus Quest 2 with 64 GB has been removed from the official store. Unfortunately, there’s no option to expand the internal storage with microSD cards as you can with the Nintendo Switch. However, the average user will find that even 64 GB is enough if you don’t want to download your complete game library at once or store all your VR movies locally.

Our Quest 2 review found that battery life can be a limiting factor for using the VR headset. You will most often have to charge it after each gaming session, as the battery lasts between two and three hours. If you find that limiting, there is a solution. The Quest 2 Elite Strap with a battery costs $109 and can double the time you can spend gaming without having to charge the Meta Quest 2.

Keep in mind that the strap has a USB-C cable you need to connect to the VR headset. Also, both the headset’s and strap’s battery need to be charged separately. The accessory also adds almost 200 grams to the weight of the VR headset; our Oculus review found this to be a tricky balancing act between comfort and gaming session length.

The Oculus store is the go-to spot for anyone looking for virtual reality entertainment and content. While platforms like Steam also have a great selection of VR games, with the Oculus Quest 2, you get access to plenty of other content.

The first thing you’ll notice at the Oculus Store is that you can choose between Quest, Rift, and Gear VR. Even though some of these devices are discontinued, you can still use the store and buy the supported apps.

The Oculus Rift and Quest 2 have the largest selection of proprietary software: You can browse the store through the VR interface or website to purchase games, apps, and other entertainment items, including VR movies, evocative stories, and family-friendly content.

Most users will be especially interested in VR games. The Oculus Store has all the popular hits like Beat Saber, Superhot, Job Simulator, Gorn, Five Nights at Freddy’s: Help Wanted, and many more.

The Oculus Link cable or any other USB-C to USB-C Link cable is something we consider a must-have for Oculus Quest 2 advanced users. You’ll need to download the Oculus PC app and connect your headset to the USB port. The main advantage of Meta’s cable is that it’s five meters long and can be looped through Quest 2’s headband and plugged in on the side to prevent inconvenience while playing.

While the Quest 2 price puts it among the most affordable VR headsets, the price tag for the Oculus Link Cable is steep, at $79, which is almost a quarter of the headset’s price. If you are not set on getting the official product, any USB-C to USB-C cable will do if it’s long enough.

Are you looking to use the Oculus Quest 2 to play VR games you have on other platforms like Steam? Then, you’ll need a gaming PC built with a minimum of 8 GB of RAM, a CPU that’s at least as powerful as Intel i5-4590 or AMD RYZEN 5 1500X (newer generations are preferable), and a supported GPU. This will enable you to play games like Roblox, which are not available on the Oculus Store.

The Guardian system is Quest 2’s most prominent feature. You can draw boundaries around yourself, and the headset will warn you if you are about to cross them. This will keep you safe from bumping into furniture or walls while you play. With advanced tracking, you have six degrees of freedom: The Quest 2 tracks your head, body, hands (or controllers), and the environment without requiring external sensors.

With the Oculus app, you can cast what you see on a TV, phone, or computer. This can make the gaming experiences more social, and you can share the activity with your family or friends. However, during our Oculus VR review, we’ve experienced input lag when we cast the image wirelessly, and that’s another reason we would recommend using a cable in this situation.

Hand tracking will let you play some games or use applications without the Touch Controllers. We were impressed with how advanced the tracking system is.

The biggest downside of the Oculus Quest 2 as an all-in-one VR headset solution is the Facebook account requirement. Even if you’re not a fan of social media, you’ll still need to create at least a private account other users won’t be able to find just to have access to the Oculus Store. While Meta claims that having a Facebook account associated with your Quest 2 is to increase account security. In practice, this means that, if you lose access to your account, you may also lose access to your games.

Without a doubt, the price of this VR headset is its most outstanding feature. The Oculus Quest 2 MSRP currently costs $385 for the 128 GB and $515 for the 256 GB version. Just for comparison, the Valve Index retails for around $1,300 if you can find one, and the PS VR is about $450, but also requires purchasing a PlayStation 4 or 5 to use it, both of which are currently fairly elusive products.

Accessories can pile up on the cost of the Oculus Quest 2, but the basic product will be more than enough for most users.

In terms of price, performance, and features, there isn’t a better VR headset than the Oculus Quest 2 in the 128 GB version. The increased storage resolved one of the main issues of the 64 GB versions that bothered avid gamers and made the headset more future-proof. However, even the Oculus Quest 2 256 GB price is fantastic compared to the competition.

If you consider things like Guardian and excellent hand tracking, you won’t regret your purchase of this headset, especially since it doesn’t require you to have a PC or gaming console to enjoy VR.

It most certainly is. The VR headset is a powerful stand-alone solution for VR gaming and is also affordable. At the moment, there aren’t any other devices that can compete with Meta’s offer in this price bracket.

How do you get free games on Oculus 2?

You can easily find free games in the Oculus Store. Just type “free” in the search bar, and see what’s available. You will also find demo versions of some paid games, making it easier for you to decide if you want to pay the full price for them.

What are the bad things about the Oculus Quest 2?

The most negative point in our Oculus Quest 2 review is the mandatory requirement to have a Facebook account to use the device. Furthermore, some accessories are pretty expensive compared to alternatives from other manufacturers (especially the dedicated USB-C cable). Otherwise, we have an overall positive opinion about the headset and its capabilities.

The products are aimed at different users, and the PS4 can’t replace the Switch in some aspects, while Nintendo’s console can be used as a home entertainment center.

What Is a MIDI Keyboard and How Do You Use It?

How To Mix a Song: Mixing for Beginners

Wealthsimple Review: Pros, Cons, and How It Works